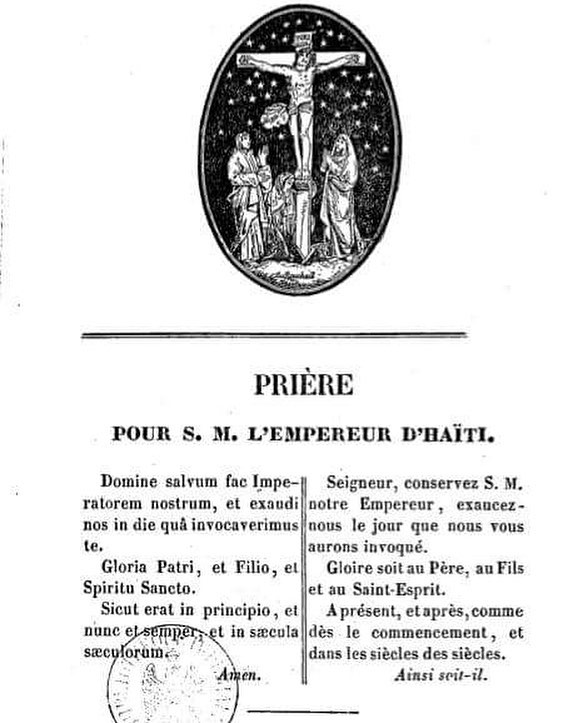 Prayer for the Emperor of Haiti (1850). Photo by Mr Orlando Aurélien.

The Constitution of 20th September 1849 granted the Emperor Faustin I the right to create hereditary titles and confer other honours on his subjects. During his reign, Faustin I attempted to create a strong centralized government, which while retaining a profoundly Haitian character, borrowed heavily from European traditions, especially those of the First French Empire. One of his first acts after being declared emperor was to establish a Haitian nobility. The Constitution of 20 September 1849 granted the Emperor the right to create hereditary titles and confer other honours on his subjects. Volumes 5 and 6 of John Saunders and Westland Marston’s The National magazine (published in 1859) stated the empire consisted of 4 princes, 59 dukes, 90 earls, 30 lady knights (but no male knights), 250 barons, and 2 marchionesses. The first patents were issued by Emperor Faustin on 21 December 1850. Other sources add “trent cent Chevaliers” and “quatre cents nobles” to this list. According to the historian Christopher Buyers, the first patents issued by Emperor Faustin I created 5 princes of the Empire, 61 Dukes, 96 Earls, 345 Barons, numerous Chevaliers and nobles. In October 1849 one lady was elevated to the rank of a Princess in her own right, another to that of Duchess, and four others to that of Marchioness (a rank exclusively limited to ladies). The higher ranks were almost exclusively conferred on distinguished and high ranking military officers. Most of whom were ancient surviving leaders of the wars of independence, and who expired within a short period of receiving promotion to high honours.

Although further creations were made after 1849, these were comparatively few and far between. Subsequent creations extended the number of noble titles. Titles issued by king Henry Christophe were sometimes reissued by Faustin. As an example the title of Comte du Terrier-Rouge was issued to Charles Pierre under Christophe (The Armorial of Haiti, College of Arms, London 2007, p. 78) and the same title was issued under Soulouque on behalf of general Guerrier de Prophete (Java-Bode 5 August 1857).

The styles enjoyed by gentlemen were as follows:

Prince: Monseigneur le prince, with the style of His Serene Highness.

Other gentlemen of rank: Monsieur.

The styles enjoyed by ladies were as follows:

Princess: Madame la princesse, with the style of Her Serene Highness.

Other ladies of rank: Dame. 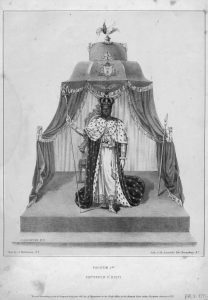 H.I.M. The Most High, the Most Glorious and Most August Emperor Faustin I, by the grace of God and the Constitutional Law of the Empire, Emperor of Haiti 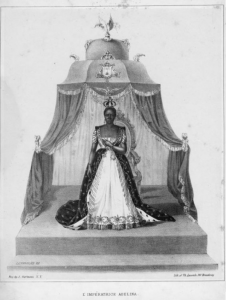 Adélina Soulouque (1820 – 1878), Empress of Haiti with the style of Her Imperial Majesty 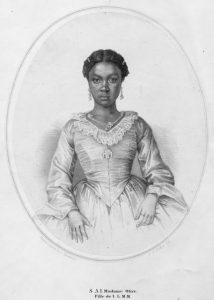 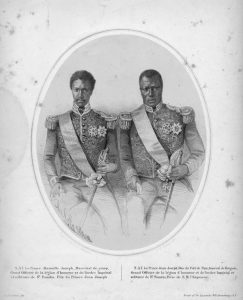 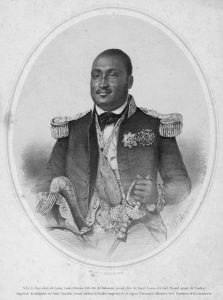 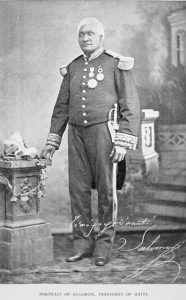 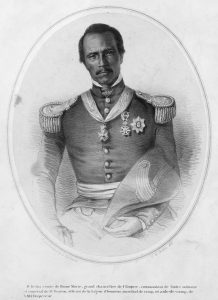 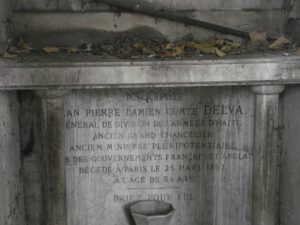 Tomb of J.P.D. Delva at Montmartre Cemetery in Paris 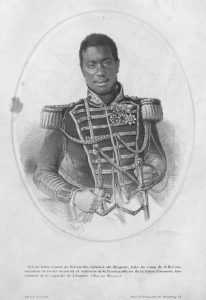 H.E. Jean Philippe (Vil de Lubin), Count de Pétionville, sometime ADC to the Emperor and Governor of the Capital of the Empire 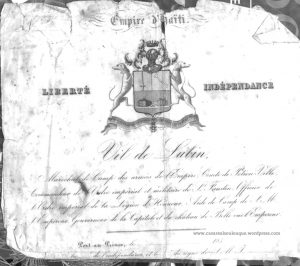 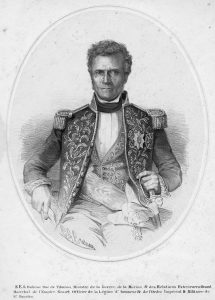 Louis Dufrêne, Duke de Tiburon, Marshal of the Empire, Minister for War and Marine, and for External Relations was the grandfather of two wives of Lucien Napoléon Bonaparte-Wyse. His wife, with her first husband, the ancestress of the Barons de Clifford. 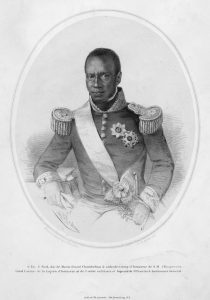