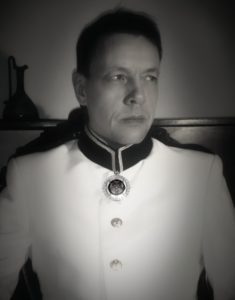 1. Through my father’s lineage I am a descendent in the direct and male line of Kerstien Quast, auf Garz (generation I). As head of the family, I am the president of the Familienverband der Freiherren von Quast.

2. Through my mother’s lineage, I am a descendant of the counts of Oldenburg and the ancient kings of Denmark, Norway and Sweden.

Sources: Patriots, privateers and international politics: the myth of the conspiracy of Jean Baptiste Tierce Cadet. / Jordaan, H.R. Curaçao in the Age of Revolutions, 1795-1800. ed. / W. Klooster; G.J. Oostindie. Leiden : KITLV (Royal Netherlands Institute of Southeast Asian and Caribbean Studies) Press, 2011. p. 141-169): “Eight months after being deported from Curaçao, Tierce, en route to France, arrived in the Batavian Republic. He was travelling with an officer of the Batavian navy, Jan Hendrik Quast, who served under Kikkert in Curaçao. Both men were arrested and questioned. The Batavian authorities intended to put Tierce on trial for trying to overthrow the Curaçao government and plotting to liberate the slaves, but it appeared very difficult to produce the necessary evidence against him. All the papers found in the possession of both Tierce and Quast were confiscated and studied, but these contained no information that could be used against them. Although the attorney-general pointed to the fact that from his confiscated correspondence it had become clear that as maritime agent Tierce had been in contact with well known people like Victor Hugues, Léger-Félicité Sonthonax, Philippe Roume, and Toussaint, who had played a ‘dubious role’ in the French colonies, the Court of Holland judged that there was absolutely no evidence for the accusations against him and that both Tierce and Quast were to be released from criminal arrest.”

Relationships with Faustin I, former emperor of Haiti

5. Jan Hendrik’s grandson, my direct ancestor Johannes Rudolph Latté Quast (1839 – 1897), was shipowner and member of the Freemason’s Lodge Igualdad on the island of Curaçao [hereafter: Latté Quast, generation XIII]. “The Most High, the Most Glorious and Most August Emperor Faustin I, by the grace of God and the Constitutional Law of the Empire, Emperor of Haiti” (hereafter: Faustin I), Grand Protector of the Franc-Masonic Order, conferred to Latté Quast in 1858 the rehabilitated title of Son Altesse Sérénissime Monseigneur le prince de Saint-Marc.

Sources: The Church of Jesus Christ of Latter-day Saints, “Pedigree Resource File,” database, FamilySearch (https://familysearch.org/pal:/MM9.2.1/9HXC-TRB: accessed 2017-02-18), entry for Faustin-Elie Soulouque Empereur d’Hayti, submitted by csimon2749684 [rev. Claude Simon] with reference to a manuscript in the National Archives of Haiti; Oral transmission from Ada Olivia Quast-Kwartsz to me (Wassenaar, May 2000); Confirmation by a declaration from Don Fernando Muñoz Altea, King of Arms of the Royal House of Bourbon-Two Sicilies, 10 May 2016, reg. Prot. 7-2016.

6. Traditionally, the title of Prince de Saint-Marc is conferred as a prince du sang (prince of the blood), meaning legitimately descending in the dynastic line from the realm’s hereditary monarch. The original title was issued by King Henry Christophe to one his supporters. His name is not known or recorded and no known decedents are recorded. It is considered extinct.

8. The legal basis for the line of succession to the throne of Haiti at the time that it was in force, was the Constitution of 20 September 1849. The Constitution made the Imperial Dignity hereditary amongst the legitimate and natural direct descendants of Emperor Faustin I, by order of primogeniture and to the perpetual exclusion of females and their descendants. The Emperor could adopt the children or grandchildren of his brothers, who became members of his family from the date of adoption. Sons so adopted enjoyed the right of succession to the throne, immediately after the Emperor’s legitimate and natural sons (Les constitutions d’Haiti, 1801-1885). Faustin I had no sons and therefore adopted his brother’s son, Prince de Mainville Joseph, who, after Faustin I’s abdication, was pretender under the name “Joseph I”. Mainville’s son, Joseph Soulouque, was subsequently pretender under the name “Joseph II”. No further claims are known.

9. In regard to my family history and relationship with Faustin I (as mentioned above), the traditional rules as stipulated in the Constitution of 20 September 1849, given that traditionally the title of prince de Saint-Marc was a title created for princes of the blood and finally the fact that no other claimants are known, in my opinion the dynastic tradition has passed (via my great-grandfather Carl Magnus Neuman Quast) to me. I therefore consider myself to be heir presumptive to the dynastic traditions that are attached to the headship of the Imperial House of Haiti. These traditions include the fons honorum to confer legitimate titles of nobility and to confer ranks in dynastic orders of chivalry, on worthy individuals. The ancient imperial Orders have been approved to wear in France by the Légion d’honneur (Chambers’s Journal of Popular Literature, Science, and Art, XI, jan-jun-1859, pp. 150-152).

10. In accordance with my hereditary birthrights as heir presumptive and to honour the former Imperial Court as created by Faustin I, I will henceforth use and be known by the title of Son Altesse Sérénissime Monseigneur le prince de Saint-Marc (His Serene Highness Monseigneur the prince of Saint-Marc). I will pursue my dynastic rights as mentioned above by issuing new titles of nobility and reviving the dormant imperial Orders of Chivalry as Orders of Honour. I will acknowledge and respect the original Haitian noble titles and armorial bearings, as issued by the emperors Faustin I and Dessalines and by king Christoph.