Three years after the outbreak of the French revolution, the island of Santo Domingo faced a slave insurrection. A bloody struggle ensued for nearly thirteen years, in which, France, Spain and Britain attempted to gain control over the island. Spain eventually ceded her rights to the western parts of the island to France in 1795 and withdrew from the conquest. The whole island eventually established its freedom by soundly defeating the French forces and forcing an evacuation in late 1803. The independent state of Haiti was declared on 1 January 1804, the first such black state to be established anywhere in the world. 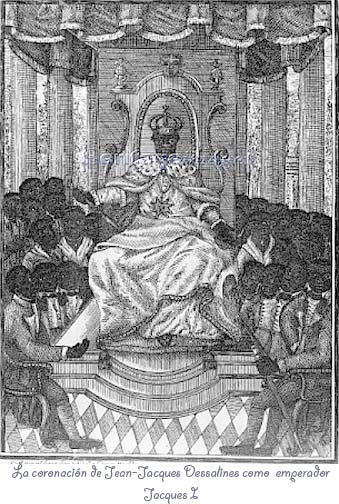 The first Head of State was the successful commander of the nationalist forces, General Jean-Jacques Dessalines. He was proclaimed Emperor Jacques I later that same year and crowned on 8th October 1804, two months before his white contemporary, Napoléon.

The new Emperor did not enjoy his new dignity very long. An insurrection led by disgruntled army generals led to a division of the country between a northern zone, controlled by blacks, and a southern zone controlled by mixed-race mulattos. The struggle resulted in the death of the Emperor while leading his troops against the insurgents in 1806. The subsequent history of the country owes much to the bloody struggle for control between these two racial groups.

General Henry Christophe, C-in-C of the army and unofficial heir to Emperor Jacques I, succeeded him but was only able to establish a stable government in the north of the country. He did not assume the Imperial mantle, styling himself Lord President of a Republic instead. However, a new constitution in 1811 declared the island a kingdom with Christophe as King. 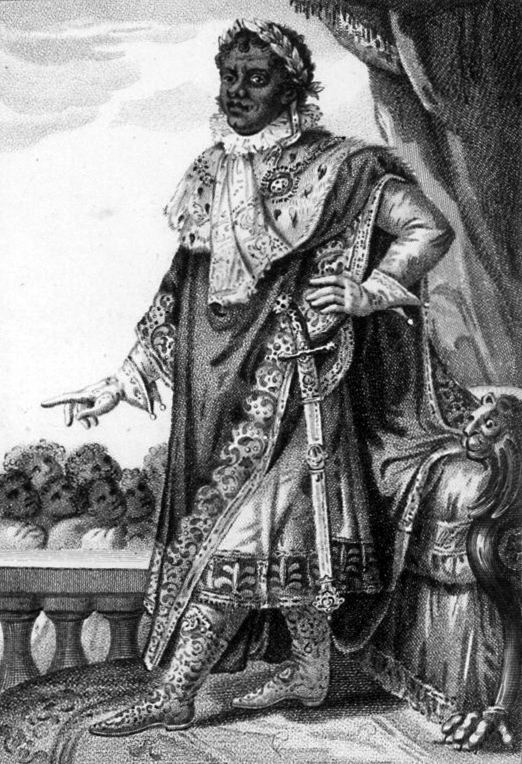 King Henry constructed magnificent monuments, reformed the government, the civil administration and the army. He established a navy, founded a system of public instruction and several learned societies, opened diplomatic relations with foreign governments, and corresponded with societies and institutions in Europe. By all accounts, a successful, learned and enlightened ruler. He was a lifelong admirer of King George III and modelled his court on the Court of St James. At his Coronation he founded Haiti’s first Order of Chivalry and a peerage, creating Princes, Dukes, Counts, Barons and Chevaliers. Some of these titles, such as the Duke of Marmalade and Count of Limonade, caused ridicule within certain quarters in Europe and America. However, these were territorial designations based on actual place names in Haiti. No more or, no less reason for merriment than a Prince of Orange or a Duke of Bouillon. 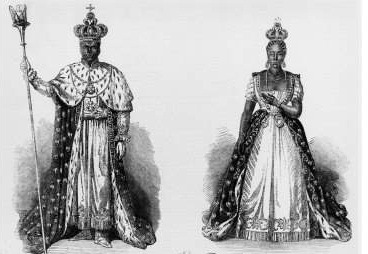 In 1843 the eastern, Spanish speaking parts of the island declared full independence and established the separate Dominican Republic. The western parts of the island continued as the Republic of Haiti under the control of French speaking mulattos. Relations were far from peaceful and intermittent warfare between these two states continued for most of the century.

The mulattos attempted to paper over the rift between themselves and the blacks by appointing a series of aged black military officers to the Presidency. They believed that they could control affairs behind the scenes while having a figurehead accepted by the blacks as one of their own. In 1847 they plumped for Faustin Soulouque, an officer of the Presidential Guard, believing him to be a pliable puppet. Within two years however, he succeeded in establishing a new constitution, which revived the monarchy for the third time. Soulouque was proclaimed as Emperor Faustin I in 1849 and was crowned in an opulent ceremony at Port-au-Prince three years later. He revived the nobility on a larger scale than King Henry I and founded four orders of chivalry. However, he ruled as a virtual dictator, ignoring parliament, popular opinion and the powerful mulatto oligarchy.

Faustin I was born at Vialet, Petit-Goâve, 15 August 1782 as Faustin-Élie Soulouque, son of Marie-Catherine Soulouque. offered the Imperial crown of Haiti by the Senate and the Chamber of Deputies 25 August 1849 (following a vast popular petition addressed to them by a number of military and civilian bodies on 20 August 1849). Proclaimed as Emperor of Haiti with the reign name of Faustin I together with the style of His Imperial Majesty at the National Palace, Port-au-Prince, 26 August 1849. Crowned at the renamed Imperial Palace on the same day. Consecrated at the old Cathedral of Notre Dame de l’Assomption, Port-au-Prince, 2 September 1849. Promulgated a new Constitution 20 September 1849. Crowned at the Champ de Mars, Port-au-Prince, in the presence of the Vicar-General Monsignor Cessens according to Episcopalian (Franc-Catholique) rites, 18 April 1852. Chief Sovereign, Grand Master and Founder of the Imperial and Military Order of St Faustin and the Imperial Civil Order of the Legion of Honour 21 September 1849, and of the united Orders of St Mary Magdalen and St Anne 31 March 1856, all in three classes. Grand Protector of the Franc-Masonic Order 1850-1859. Patron Collège Faustin 1848-1859. Founder of the Imperial Academy of Arts in 1856.

Although Faustin reigned longer than his predecessors, he succumbed to an inevitable coup d’etat in 1859. Refused protection by the French Consulate, he sought refuge onboard a British warship and was taken into exile with his family. Faustin lived at Kingston in Jamaica for many years in near poverty, despite press reports that suggested that he had taken great quantities of jewels and gold with him. Eventually permitted to return to Haiti in old age, he died at Petit-Goâve, his place of birth, in 1867. 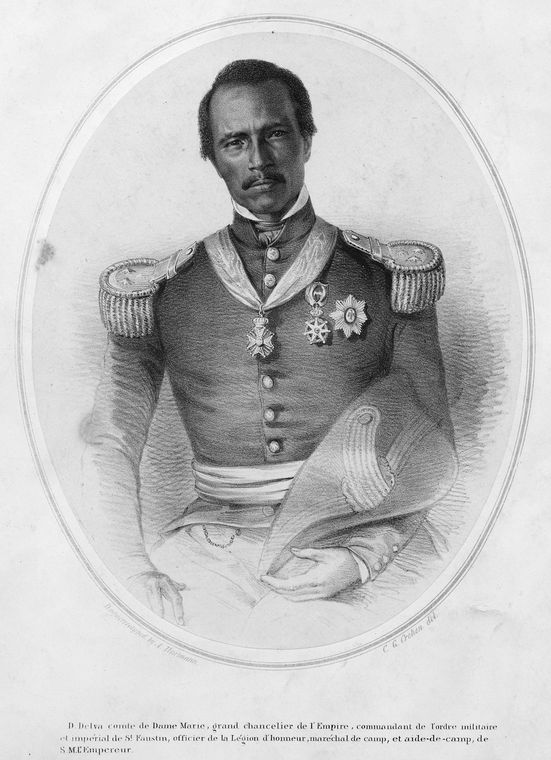 Salnave, a light-skinned mulatto, was born in Cap-Haïtien in 1827. He enlisted in the Haitian Army in 1850. He was captain of cavalry when Fabre Geffrard overthrew Faustin Soulouque in January 1859, and was rewarded for his aid with the rank of major. A fourth and final attempt at founding a monarchy supposedly took place in 1868. Haydn holds that General Sylvain Salnave, who had already declared himself President-for-Life, proclaimed himself Emperor in August 1868. However, Haiti was in a state of utter confusion at that time; three rival regimes competing for power in different parts of the country. It is therefore impossible to completely verify Haydn’s claim. Salnave was captured, tried and shot by his rivals in 1870 (author: Christopher Buyers). Literature: Haydn, Joseph; Benjamin Vincent (1860). A Dictionary of Dates Relating to All Ages and Nations: For Universal Reference Comprehending Remarkable Occurrences, Ancient and Modern, The Foundation, Laws, and Governments of Countries-Their Progress In Civilization, Industry, Arts and Science-Their Achievements In Arms-And Their Civil, Military, And Religious Institutions, And Particularly of the British Empire. p. 321. Retrieved 10 January 2020.